As it is my way, I made no effort to protect the guilty in yesterday’s post. However, I did take some literary liberties so that the main point of the narrative was clear. Today, I will fill in on some of the detail omitted such as the awful English weather. Make sure you are snug and warm as you sit back to read about (DA DA DA Dahhh! Dramatic organ chords), “How I came to be out in the cold” or “ It was a dark and stormy …day.”

Charlie and I arrived on Friday evening and enjoyed exploring the surrounding environs of the hostel which was on the eastern shore of Bassenthwaite Lake. Sitting in comfy chairs by the hostel lounge fireplace was conducive to late night talks and starting the male bonding process. I remember sleeping well with the sound of a small waterfall located behind the hostel, my lullaby that night.

The next day, fortified with a heavy Cumberland farm breakfast, we were in high spirits as we set off to on the trail behind the hostel to climb Skiddaw at 931 m high. Although, the day had started sunny, rain in the form of a light spray was coming down when we began our ascent. Charlie was better equipped than me with proper walking boots and a rain parka. Being a poor student, I was making do with my light spring jacket that was water resistant and my sports shoes. The light rain did not put me off as I enjoy walking in the rain.

Our route would take us past the waterfall and then past farm land. As we climbed, the vegetation will become more scarce and wind-swept and the ground more rocky. Once we reached the summit, we planned to walk the top of the ridge southwards and end up in the town of Keswick. We had been told that it would take about three hours but we allowed ourselves four hours. We took our time, often stopping to enjoy the view and to talk.

However, the rain got progressively heavier throughout the morning. I got more and more worried as I felt the cold and wetness slowly penetrating my jacket and jeans. Just before we reached the summit, it was clear that we were in the midst of a heavy storm with lashing winds. I was soaked through and struggling with both the cold and the weight of my waterlogged clothing. We huddled against the wind and consulted. We reckoned that we were about the halfway mark of the hike and it made little difference whether we turned back or continued. So with bravado, encouraged by our testosterone loaded, “men must be men” agenda for the weekend, we pressed on. In retrospect, it was wiser to turn back because as we traveled along the ridge, we had no protection at all from the driving wind and rain. 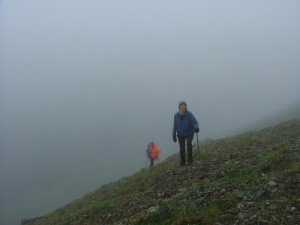 So, cold, miserable and waterlogged, we plodded on. We passed a man on the ridge. He was fully decked out for the wet weather with heavy duty raincoat. He didn’t say anything to us but he shook his head. Then we passed an elderly lady who was apparently walking her small dog. She was also well insulated against the elements but her dog despite wearing a doggie jacket was clearly wet and miserable. The lady pulled us aside and berated us,” You fools! What are you doing up here in this weather in those clothes?”

No need to antagonize the natives, I thought. “Good afternoon, ma’am. We are just enjoying a walk in this bracefully, refreshing weather.”

But here was no appeasing her. “You idiots. You have no idea what you are doing. Get off this mountain IMMEDIATELY! In this weather you’d either walk off the edge or freeze to death.”

Charlie and I were both grew a little annoyed at this yapping woman. That’s no way to talk to men who knew what they were doing. Charlie retorted, “Ma’am don’t worry about us. We know what we are doing. But you, ma’am should take better care of your dog. You’re lucky we don’t report you to the RSPCA!”

She showed us the finger and left in a huff carrying her dog. We laughed, celebrating our victory until we swallowed mouthfuls of rainwater. We were quite proud of the way we, “men” had handled the situation.

Strangely, after that encounter, neither of us felt cold at all. We happily chatted all the way down the mountain and when we had reached Keswick town, the rain had stopped. We found a place away from prying eyes, stripped and tried to wring the water from our clothes to get rid of the excess weight of water. We redressed and walked into the City Hall which doubles as the information centre. While we were there, we both noticed a large notice saying “Storm Warning. Hiking on the Mountain Trails is Prohibited.” We giggled. We laughed at each other for not checking the weather forecast but we were proud that we had done the hike.

As it was about one o’clock, Charlie suggests we take our pack lunches at Frair’s Crag down by Lake Derwentwater. Feeling positively warm despite our dripping clothes, we set off to the lake. On the way, we bought some ice cream as the sun had made a brief appearance. As we sat on some rocks with our feet in the icy cold water of the lake, eating our ice cream, we could see storm clouds literally rolling in from the southern end of the lake. Charlie asked me what we should do with the storm looking to reach us in about fifteen minutes. I said, “Plenty of time to eat our lunch and then sit back and just enjoy watching the storm break over us.”

Charlie concurred with the suggestion. So we ate our lunches, and about this time, Charlie suggested we make the pact to do this trip again next year and for both of us to remain romantically unattached for at least one more year. After all we had been though, how could I say no. Charlie punched me on the shoulder which is a sign of affection amongst men and then we both sat back, enjoyed the rain pelting down and ooh-ed and ahh-ed as the lightning arcs lit the sky. 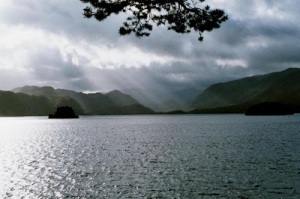 Epilogue:
Astute readers will have realized that both Charlie and I were suffering from hypothermia which impaired our judgment and made us behave irrationally. At advance stages, the victim actually stops feeling cold. In truth, we could have died out there. We ourselves only realized this when we reviewed what had happened the following day. Nevertheless, thankfully having survived, we were very gung-ho about our deepened friendship and very firm about our pact.

We kept in touch regularly for the next few months but then Charlie disappeared off the radar and he never contacted me about our follow up trip the next year. Later that year, I bumped into James and asked him for news on Charles. I was dumbfounded to hear that Charles met up with this sweet young thing not three months after our trip and had been going steady since. Charlie brought her along to our Christmas get-together but neither of us ever mentioned our pact again. There seemed very little point in it; clearly another good man had fallen to the female wiles. I was happy though to have outlasted all these big-talking men. And that is the story of how I came to be out in the cold…..twice.