Global warming means extreme weather throughout the world. Hundreds die in floods in Pakistan while at the same time hundreds also die of heat wave in Eastern Europe and Greece. Meanwhile floods also hit England and Oklahoma. Manitoba gets hit by multiple tornadoes on two consecutive days. This was all in the last week.

Even before this, it was noted that the sea ice in Northern Canada was forming later in the year and there was less of it. This is severely impacting the polar bears that rely on the ice to go out to sea to hunt for seals. The lack of sea ice has led to reports for the first time of large numbers of malnourished polar bears, reports of bears eating their own cubs and even for the very first time, reports of bears drowning because there was too much sea between ice packs.

Some fear that this could be a serious threat to the polar bears and could lead to their extinction. The few optimists that remain think that nature will learn to adapt.

For polar bears, adaptation may mean finding alternative food sources or moving to where the food is and as bears of all sorts begin to move southwards, this invariably could lead to more human animal clashes. As a service to those in potentially affected areas like the USA and Canada, I have included the following advice on safety from the Alaskan Deparment of Fish and Game. For all our sakes, please read it carefully to the very last line. 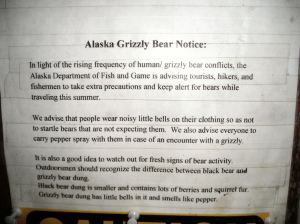