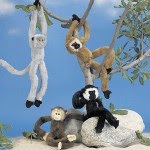 It seems that Jo at A Majority of Two is in need of good cheer in the form of jokes. As a gentleman squirrel, I felt duty bound to respond.

Tonight, I would like to share with you a Zimbabwean joke which I recently learned from a Zimbabwean student friend which again features a particular problem in that country.

There is a city on the western mountains of Zimbabwe which is relatively prosperous but on one occassion, it had a terrible problem. All the monkeys from the surrounding mountains all came into the city and caused a great pandemonium. The Mayor called out the army and the police and they came out fully armed and bristling with guns, ready to cull the monkeys.

However, a staff of the National Wildlife Department intervened, saying that the monkeys were rare and endangered so they could not be shot. The Mayor did not know what to do, given those circumstance.

So the army and police were both milling around due to the lack of instructions when a man appeared, claiming he could talk to monkeys and could rid the city of the monkeys. The Mayor asked him to proceed.

The man went to the city centre and whistled and all the monkey gathered round him. He said something to them and the monkeys all turned to look at the police and army men and nodded their heads solemny. Then the monkeys began to disperse.

The man whistled and again the monkeys came round him. He said something else to the monkeys and this time the monkeys all broke up laughing until some were hysterically rolling on the floor. Once again, the monkey began to disperse.

The man whistled and gathered them a third time. This time he said something and all the monkeys fled the city and returned to the mountains.

The Mayor was pleased and rewarded the man handsomely. The police chief however, stopped the man and insisted that the man explain what he had said to the monkeys.

The man said, “the first time, I called the monkeys together and told them that all the men with guns were soldiers and police and that their job was to uphold justice in the land. The monkeys then nodded in silent respect.

The second time I called the monkeys, I told the monkeys how much you were being paid to be the noble defenders of the law and they laughed.

The third time, I merely said that you had come to recruit them to join the army and police and that is why they all ran away!