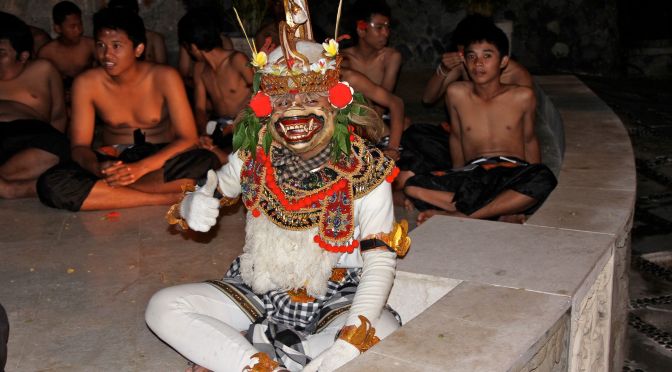 Our friend Mago does a series on his blog called “Sunday Music” and just recently he covered a song by Annette Hanshaw (1901-1985).  In his post, he included the use of that song in an animated version of the Ramayana story.  A rather unusual combination which you should check out.

Anyway, this reminded me that I had a related post that had long been on the back-burner and I decided it was time to bring it to a boil.

In Bali, Indonesia, there is a dance called the kecak dance in which dancers enact the Ramayana story with musical accompaniment provided by the rhythmic, hypnotic chanting of a large group of men.  It is quite an experience.  I have had the good fortune of witnessing it twice.  Once, I saw it as part of a dinner performance at an international beach hotel in Nusa Dua (which is where all the photos  below were taken) and once at a sunset ceremonial performance at the clifftop temple at Uluwatu.  Of the two, I really must recommend the spectacular setting at the Uluwatu temple which also includes a fire dance.  If you are ever in Bali, this is definitely one of the highlights not to be missed.  To tantalise you, I have included a video by Hawaiian filmmaker and reknown hula dancer Kimokekahuna at the Uluwatu temple.

The Ramayana is a classic Hindu story.  In brief, the kecak dance is about the hero Rama and his beautiful wife Siti.  One day while in the forest, Siti sees a golden deer and begs Rama to capture it for her.  He leaves Siti under the protection of his brother Lakshmana and chases after the deer.  Sometime later, Siti is misled into thinking that she hears Rama calling for help.  Fearful for her husband, she pleads for Lakshmana to go and search for Rama.  Lakshmana is reluctant to do so at first but eventually gives in to her pleas and disappears into the forest looking for Rama.

But it was all a ploy to get Siti alone and unprotected and she is kidnapped by the demon King Ravana and taken to his kingdom of Lanka.  The rest of the story is about how Rama defeats Ravana and rescues Siti with the help of the white monkey king, Hanuman and his army of monkeys.