Judging from the noticeable lack of comments on my previous post and the content of the few comments that were there, the political situation in the USA remains tense and is a topic that is either offensive or uncomfortable with readers.  So I decided that for this post, I should stick with a topic that should be offensive to no one but myself …….. i.e. my recent 50th birthday.

It was actually in September but that was right in the middle of my big house-moving exercise and blog break, so I did not post on it earlier.  Of course, I got my expected portion of “50 year old” gag birthday greetings like “You are now officially an Oldie” or “Don’t worry – once you are over the hill, you pick up speed”.   Sadly, that was about all I got.  Not a single present. Nada. Zero. Zilch.

My wife was trying to plan a surprise party for me with some friends but with all the packing and the rush of moving house, it did not materialize.  I don’t usually celebrate my own birthdays so it was not really missed.  Some say that turning the BIG 50 is an important milestone that should be celebrated but I think they are just hoping for a party and some cake.  Besides, I don’t think of myself as 50 but as 18 with 32 years of experience!

Anyway, to celebrate the additional 32 years of being 18, I tried to trace how my tastes and directions have changed during that time.  As you see, I am still a work in progress and still changing…….. 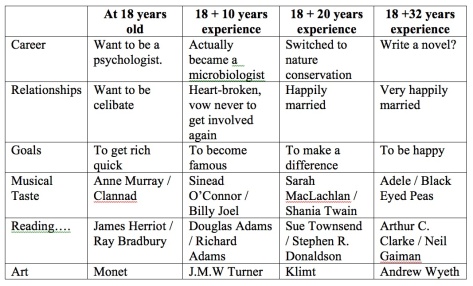