But I have to say that I was impressed when I heard the news that he was arrested yesterday while protesting outside the Sudanese Embassy in Washington D.C.  Maybe “Gorgeous George” is more than a pretty face.

One of Mr. Clooney’s more forgettable performances on the silver screen was as Batman in the 1997 movie, “Batman and Robin“.  But it would seem some of the mystique and persona of the Dark Knight of Gotham has rubbed off on him.  Like the Dark Knight, George does not hesitate to stand against the darkness and to stand up for what is right. 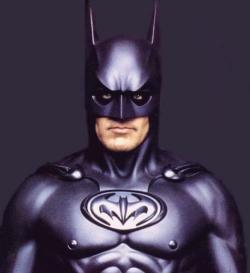 George Clooney was protesting against the actions of the Sudanese government carrying out attacks and killing their own people in the southern regions of the country and also preventing humanitarian aid from reaching the Nuba Mountains and the Blue Nile Regions.  The government appears to be trying to intimidate the local populations, which are of different ethnic and religious backgrounds from the ruling northern elite,  into abandoning the oil rich areas.

The world needs to do more for the people of Sudan in providing aid and to pressure the government in Khartoum to stop their savage and inhumane actions against its own citizens.

And George Clooney’s interest and activism on behalf of the people of Sudan is no flash in the pan or celebrity whim.  He really understands the situation and has invested much to the cause over a long period of time and has even made clandestine visits to the region and has even witnessed an attack.

George, thank you for standing up and doing what you can.  Thank you for doing so when it could be so convenient and easy to just forget it all and enjoy your fame and fortune.  Thank you for being a good man.  I might even get over the fact of your popularity with the ladies.  I’m not sure if that is possible but I’ll try.

George also spoke to President Obama about the Sudan situation a day before his arrest.  If you are moved by the plight of the poor and persecuted in southern Sudan, follow George Clooney’s example and pressure your government  through your representatives to not let the killing continue unchallenged.